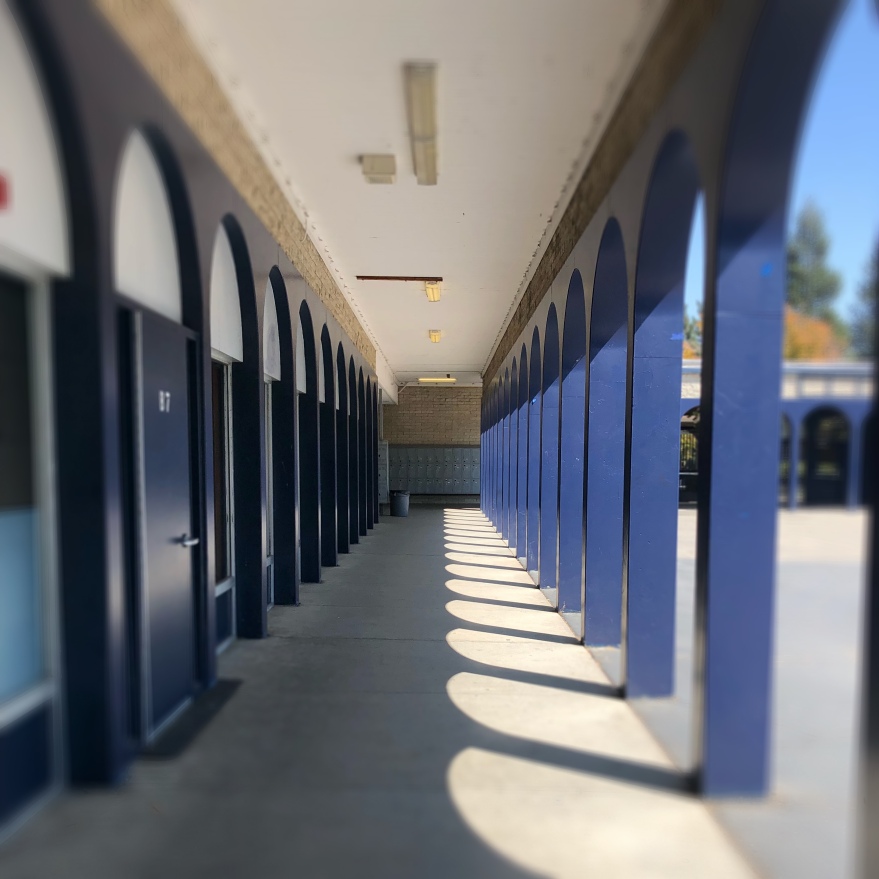 It took me 16 years to stop being afraid of my students on the first day of school. 17, if you count my year of student teaching when I showed up to observe other teachers and got tossed into a classroom to sub. Not that I knew what I was doing that first year–that year it seems fair that I quivered in my bad JC Penney pantsuit and stumbled through another teacher’s activities with five classes of kids who were only a few years younger than me.

This is the kind of thing you don’t admit out loud, the being nervous. Or, I guess I don’t hear teachers say it, which is why I’m writing it. Last year I finally came to grips with both the fact that I’ve always been nervous on the first day, and the fact that I was finally not. I know plenty of teachers who say they’ve never been nervous, that they don’t care. These are normal people with human emotions (read: not psychopaths), so I’ve been thinking about why that’s the accepted posture. I definitely don’t think it helps new teachers.

Teaching is weird. It’s you, but it’s also not you. I’ve always understood my teaching self as a character and my class as an act. I have referred to my job for years as The Mrs. Partington Show, and that’s not as much of a joke as it seems. The Mrs. Partington in my classroom is me, but she’s me if I carefully selected all the parts of me that were appropriate for teenage interaction and parent scrutiny; she’s the nice me, the patient me. She’s the me that wants to hear about your freshman football game and will joke with you about Fortnite. The me who wants to spend a lot of time talking about data or how someone is not a great test-taker. That is not me, friends. She is not the me who gets down with an episode of Dr. Quinn on a Thursday night or the me who hides in a hammock for the whole summer with Tristram Shandy. The part of that that’s hardest to reconcile is the human self that stands in front of those kids and that views the emails from the parents–she gets hurt when real conflict happens. The character doesn’t shield the real me.

That’s what I used to be so nervous about on the first day. The whole will they like me? thing. I care. Again, there are so many teachers in my life who deny any attachment to likeability, but I feel like there was at least a kernel of that at one time that inspired them to go into the profession. To say it another way–maybe they respected a teacher so much that they really learned well, and they wanted to have the same relationship with kids. And what’s wrong with being likable? I like students. I don’t think it makes me a strange person to admit that likeability plays a role in education.

I wish there was a magic phrase that helped me stop being nervous last year. I heard so many pieces of advice from veteran teachers that I tried to implement for my first decade and a half. Most consistently, the one about not being able to get meaner as the year goes on. While true, the problem with that for me was that I’m not a harsh disciplinarian, either. Frankly, a lot of things just don’t bother me. I tried starting my year off as a drill sergeant, and it didn’t last–it was as inauthentic as any other time I tried to do someone else’s shtick. The surest way to fail as a teacher is to try to recreate someone else’s thing. I had to figure out how to do this as me.

What finally clicked in year 16–which is late for such realizations, but here we are–was that if I paid less attention to myself, and I focused more on recognizable student behaviors, my job became more about gently correcting course a thousand times a day rather than putting on a show that was so fabulous it would hold everyone’s attention for 5 hours. What I know now is that students act the exact same way every single year at every point in the year. There is nothing new under the sun. I can nail it down almost to the day–when a kid will blurt out a joke to make the class laugh as I’m trying to teach. When someone will draw a penis on one of the desks. When a girl will burst through the door crying because her crush broke her heart. When they will leave a mountain of trash under their desks or destroy one of my books. And in the midst of all of this comes waves of different feelings toward their teachers–anxiety, then suspicion, then rebellion (this one lasts a while), and then a long stretch of comfortable learning, joking and testing the waters of adult conversation. Somewhere in there, we read and write.

This year, year 17, I overslept on the first day of school. I could blame it on the medication I’m taking or the fact that we had three days of soul-crushing meetings just before, but I’m sure it’s because I wasn’t nervous. The first day brought plenty of other challenges–large class sizes and enrollment issues, especially, but I spent most of the day being amused by my students. I enjoyed getting to know them, and I enjoyed the pressure being off. Everything was new, and everything was exactly as it has been for the last 16 years.

I read something about meditation long ago–that you’re not supposed to punish yourself for letting your thoughts drift. That it’s better just to note your thoughts and gently direct them back toward your breath. To just breathe. My role in the classroom is the same. Redirection.