Parenting a thirteen year old is no horror the way people try to convince you it will be. It’s so fulfilling and fun. But if you’re paying attention–if you’re really listening to her words and silences, if you’re trying to equip your daughter to fight her way into a harsh world, it can hurt.

We were at a family wedding. She was surrounded by love and loud music and Christmas lights. But even in safe spaces, biology makes the thirteen year old mind a liar: telling girls that whatever feelings they have must be wrong or awkward, that having opinions is anathema to the crowd. People kept asking her to dance. She didn’t want to. This was the crisis.

I tried my best to break it down in love: Have your opinions, Ad. We don’t control our feelings. They just happen, and nobody can say they’re wrong. You have the right to not want to do anything that you don’t want to do. Mom, she said finally, out loud, (those pleading, wet eyes!) I know it’s okay for me not to want to do things. (I exhale.) But I feel bad when I have to tell people that I don’t want to dance.

This is being a girl. At our table, I resist the urge to tell her this, to make it about me or about women and opinions and consent and being listened to and taken seriously and about not pleasing other people, but that’s what it is. Even though being a woman is different now. She is already growing up in a world that never didn’t have lady astronauts and world leaders and CEOs and computer programmers, where she can vote and make legal decisions for herself and expect to be treated and paid for what she does. But scrub that away, and there’s still fraction of society that’s not going to take her seriously because she is female. Even if nobody has told her that yet, she has internalized it, mixed with her own shyness and good girl tendencies and teenage hormones. This is where I do bring myself up–the irony of those three words–where I acknowledge that genes and my own fears have gently nudged her toward this conflict she’s having, even though we’re in the safest of spaces. 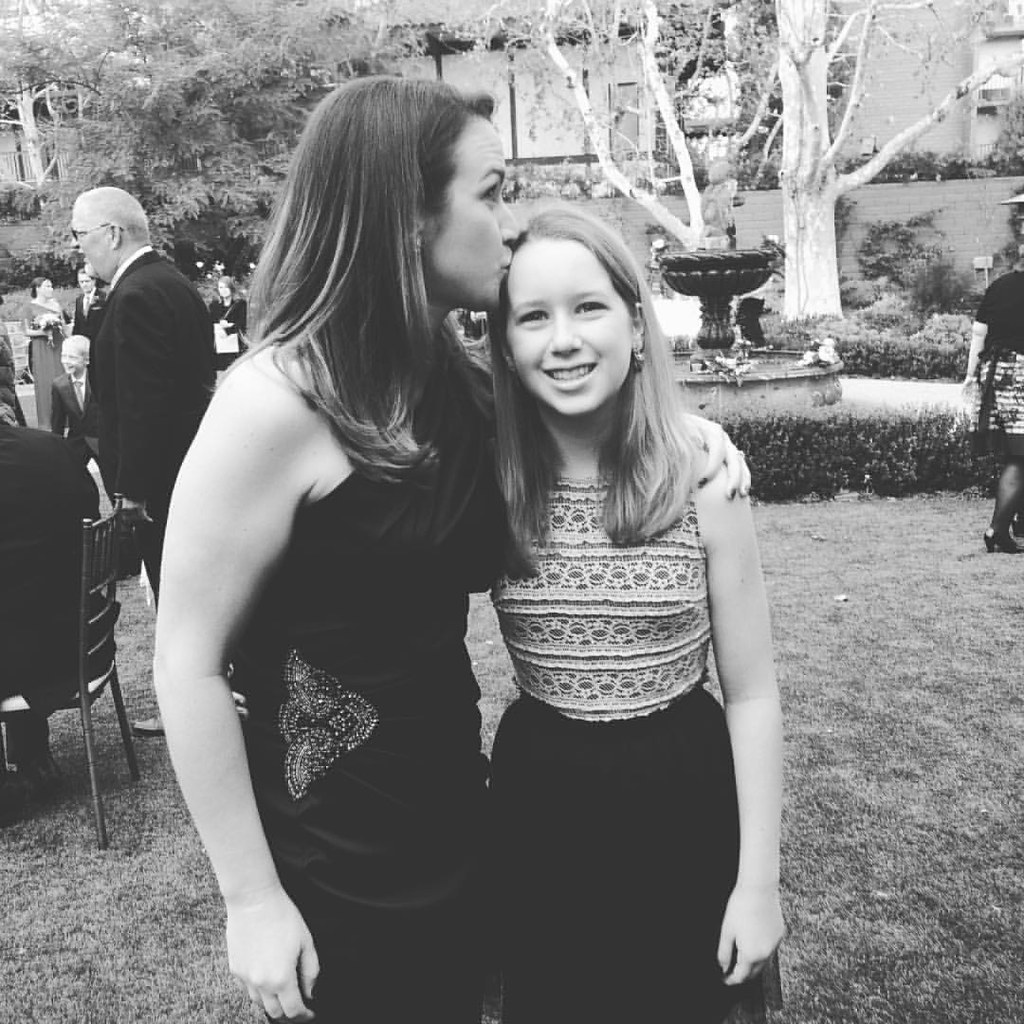 It wasn’t a moment that ended in a scene. My pep talk landed as much as it was going to land, and then we just looked at each other. Nothing happened until her loving father (the girl whisperer, we call him) scooped her up for a twenty minute walk outside, artfully using his skills of comfort and distraction to help her feel better. I was inadequate to the task, and by the time they walked back into the ballroom, all was well.

It’s naive to think that all is well permanently, or that the reason I’m still thinking about this almost three weeks later is that it’s just about parenting. There are several truths operating here:

Because yes, she is changing faster than she can see, and yes that means discomfort. And discomfort for growth is good, the kind I want her to have. But also, this: she has a mom who spends much of her day afraid to speak her mind, and always has. I remember shopping with my mom and grandma when I was about her age, and they would hold up items of clothing for me to consider. How about this, they’d ask. Yeah, that’s cute. I like it. Mmm, hmm, I said, even to things that looked awful. I couldn’t say so, even to things I wasn’t trying on, because I was worried I’d hurt their feelings. Nobody told me this was the case–in fact, I am positive I was told the opposite–but other messages about gratitude, about being considerate, and about being good were louder. And high school was a training course in learning to please: I sublimated my actual opinions time and again because it made things easier. Ballet. Church. English class. If I could figure out what someone else wanted me to say or do, I’d make them happy. Being a part of a big family didn’t make me this way, but it was fertile breeding ground for my thinking. In a big family someone else is always happy to tell you how things should be. Want to double down on that? Marry young into another big family. Try not to rock any boats. Understand nothing about how to have opinions, assert them. Speak up for yourself only once every few decades, with disastrous results. Resolve not to try again for years. Repeat.

I really think about it, there was a short time when I didn’t care so much what people thought (or even think that anyone considered me and what I had to say). This short time coincided with early adulthood, becoming a mother, and the fact that I had yet to have any online connections. But it’s different now. For the last several years I am really chafing against the sense that I need to keep my mouth closed.

What changed? I have more opinions, actually. Louder ones that seem to want out. The realization that I don’t have to enjoy things that other people enjoy, and that things about the world that make me mad–like, screaming mad–seem not to bother other folks. At the same time, I’ve developed a weird dichotomy of personal and professional lives. Being a teacher in the social media age is scary. Trying to be a writer at the same time is ludicrous. Take one moment, one word out of context, and I’m through. As a result of my fears, my teaching has become purposefully bland. Sadly numb and devoid of most of my personality–the weird quirks I used to use to shock and joke and provoke teenagers through the books I’m teaching. What other way is there to be, now? I can’t find one, so I push my real self down, hide her from sight. And ironically, at the same time, my real self has flourished. I’ve ventured into the world of writing. Ideas. Conflict. An art entirely shocking and contrary to the kind of work I’ve chosen for myself in a stodgy institution built on the illusion of righteousness and propriety.

It isn’t just my job, though. Social media makes me uneasy. It’s a double edged sword, because so often it makes me unlonely–it gives a sense of connection to an introvert sitting alone in her bedroom. But in the past year I’ve just seen how my relationship with social media is one-sided. I read and read and post pictures I like; I am addicted to the online stories, but I am afraid to be myself. I’m afraid I’ll lose my job or afraid I’ll lose the constant feed of voices, the people who are always there. (The same people who share their own opinions as easily as sticks of gum.) I fear the fight, though, or more so I fear letting people down. So I do what I’ve always done. I let people think I agree. I let myself believe that “no” needs to come with an apology.

This year I don’t have a resolution, so much as I have an intention for myself, a way to try to be. It’s not a resolution because I expect to fail regularly, and I want to allow myself the inevitable, intermittent failure that happens when you try to change. But my intention in 2016 is to speak my mind. To bring some of the authority I can summon in my writing to my real damn life, and to be smart about how I do that, but to do it anyway. Because I don’t know how much longer I can keep looking at my daughter–my beautiful, smart, worthwhile daughter–and tell her that she is not only allowed to share, but worthy of any opinions and feelings and desires she feels–if I can’t look in the mirror and tell myself the same.